When money from a childcare capital investment fund became available, the Center's administrators decided to create a new computer lab.
"This was a locker room, a real mess, and we decided to renovate the space," said Patty Kennedy, Administrative Coordinator for the Center.

Kennedy continued, "Now it's a computer lab that will serve hundreds of kids, adult education students, and seniors. Kids will come in after school to do their homework, and to play games."

The architect, Felice Silverman, of Silverman and Tryskowski Associates, developed a plan that included installing windows into the old windowless locker room wall. The building structure made it prohibitive to include real windows, so Silverman introduced the idea of an artificial sky for the room.

"Her idea was to use The Sky Factory for a mural of the sky, a SkyCeiling. When she brought this idea to us we were very impressed," said Kennedy. "When it was installed we were all amazed. Nobody had ever seen anything like it. It really makes you feel like you're outside. It adds so much to the room. It really opens up the space, and makes you feel that there is a bright sky up there even when you're in a building without any windows. We just love it," she continued.

Patty said, "After seeing the SkyCeiling installed, the principal of the school said that someday she's going to come down here, just lie down and look up into the sky for a while. Everyone enjoys it, they think it's wonderful." 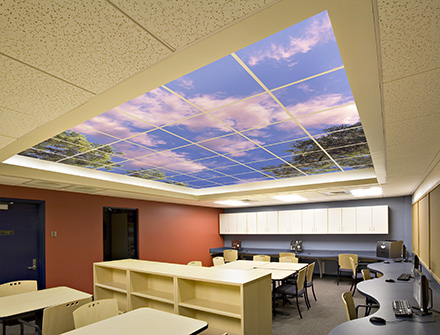