Portfolio FEATURED NEW ALL (398)
Ruiz Residence
Frankfort, Illinois dentist Edward Ruiz wanted to reduce the amount of time his kids spent in front of the television. An avid Star Wars fan, Dr. Ruiz had amassed a sizeable collection of Star Wars figures, light-sabers and memorabilia related to the epic saga. When his family moved into their new home earlier this year, Dr. Ruiz set about transforming the spacious basement into a Star Wars themed family playroom. With hundreds of Star Wars figures, period specific rooms, costumes, Star Wars pinball and Japanese pachinko machines, a mocked-up X-wings fighter cockpit, and a Millennium Falcon lounge, the basement is an amazing stage for role-playing and games that keep the kids away from the TV and into their own imaginations.

To heighten the illusion of being in a deep space environment, Dr. Ruiz thought about creating a deep space scene for the Millennium Falcon lounge, (the setting for the famous holo chess game scene between R2D2 and Chewbacca in the original Star Wars movie). Some homegrown ideas gave way to the use of a Sky Factory Luminous 360 SkyCeiling when he came across the company on the web. The Sky Factory created a custom grid that increased the sense of perspective looking through the ceiling into the deep galactic space of Robert Gendler's astrophotograph. 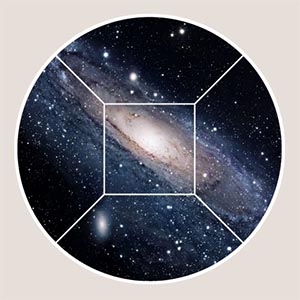 The original design for the custom Sky Factory Luminous 360 SkyCeiling. 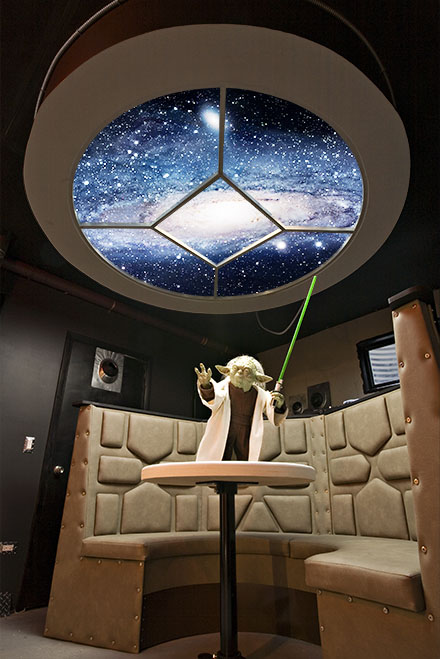 Luminous 360 SkyCeiling™ installed in the Star Wars-themed family rooms of the Ruiz home in Frankfort, Illinois.