Aperture SkyCeilings™ uniquely modify our perception of customary planar relationships and thereby boost the spatial plausibility of interior skies to a newly heightened level of illusion.

For starters, Aperture’s internal structure forgoes the familiar support grid, usually positioned between SkyTiles (image panels), in favor of an unobstructed view of the entire circular or elliptical opening.

The absence of a grid creates ambiguity for the mind as to whether or not a surface (the SkyTile) actually exists, thereby supporting perception of deep space.

Second, Aperture separates the perimeter frame from the non-reflective SkyTile surface, creating a vacant interstice. (The interstice is the empty space between the actual layers.) When the sky image (Open Sky Composition) is viewed from any off-center perspective, it appears as a thin, crescent shaped gap.

However, when viewed standing directly underneath, Aperture’s vacant interstice, subtly visible by virtue of our binocular vision, confounds the viewer’s ability to recognize and locate a precise distance to the non- reflective SkyTile surface, thereby stacking the contextual cues assimilated in favor of an alternate—and now more plausible—perception of deep open sky.

In both cases, this spatial ambiguity leads the brain’s perceptual calculus to a credible illusion that, along with the image’s recessive blue hue, signals an expanse of sky, unbounded in all directions.

Aperture generates its potent biophilic illusion by making three unexpected material transitions. Together, these structural modifications yield a portal that leads the mind to one inescapable experience—the perception of a deep, open sky whose boundaries remain invisible.

Third, Aperture features a hidden mechanical boundary. The trim side wall has a reflective surface that prevents the eye from perceiving a distinct edge to the sky image.

Combined, these three attributes create a palpable perception of depth when standing directly beneath the Aperture, as well as a distinct lateral continuum of sky when viewed from all other angles. The result—a visceral illusion of open sky with no discernable boundary.

The image panel (SkyTile) appears to hover over the perimeter frame in a way that enhances the spatial illusion of open sky.

Available in Circular and Elliptical Openings

3. Trim Side Wall
This mechanical boundary frames the image panel’s circumference with a wall that reflects light, preventing the eye from detecting a distinct edge to the SkyTile.

6. Interstice—Straight Up View
(POV perpendicular to the opening)
When the observer stands directly underneath the Aperture (circle or ellipse), the interstice is perceived thanks to our binocular vision. This contributes to the illusion of depth.

While the gap itself is an empty plane hovering over another plane (the perimeter trim and ceiling), this layering leads the brain to account for the resulting spatial discrepancy.

It does so by relying on our ingrained habits of percep-
tion and concludes that the non-reflective Luminous SkyTile must be, in fact, a receding space—a volume above a plane. 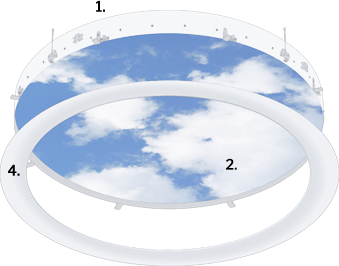 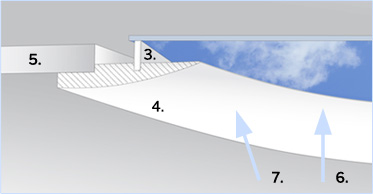 7. Interstice – Angular View
(POV off-center from the portal)
When the observer views from off-center, the circular or elliptical Aperture’s interstice is, in fact, a crescent shaped gap on the far side of the observer’s point of view.

Given the height of the installation, the nature of the SkyTile and its image, and the reflective properties of the mechanical design within the interior wall, the observer is unable to see a material edge to the sky.

Instead, the viewer perceives a sky that continues later-
ally and vertically beyond what the eye can actually see, forcing the brain to conclude the portal is consistent with the experience of a borderless, unbounded sky. Documentation